A pronoun is a part of speech that replaces a noun or noun phrase to eliminate unnecessary noun repetition in communication. (For a deeper primer on pronouns, please see the Writing and Communication Centre’s excellent resource sheet on pronouns.)

What are gender pronouns?

The English language has traditionally operated on a binary system with personal pronouns when referring to individual people: we have masculine pronouns (he, him, and his) and feminine pronouns (she, her, and hers) that indicate the gender of person to whom we are referring. These are gender pronouns.

However, since we cannot know a person’s gender identity simply by looking at them, to assume someone’s pronouns when replacing their name in any form of communication can be disrespectful and hurtful. Accordingly, it is now considered acceptable to use the plural pronouns (they, them, and their) to refer to singular persons (such as a doctor, a student, a Teaching Assistant, etc.) when we do not know their gender or when their gender is non-binary (some people prefer the term "agender." This ensures inclusivity in communication because it avoids making assumptions about a person’s gender. “They” as a singular, non-binary pronoun was even named the “Word of the Year” in 2015 (Abadi).

How can I be inclusive with gender pronouns in my teaching?

The best way to be inclusive with regard to gender pronouns is to model their use proactively and inclusively to cultivate a safe place in your classroom, office, and in your rapport with your students.

What if I accidentally use the wrong pronoun/make a mistake with a student?

If this happens, it’s okay. We all make these mistakes, and the best thing to do in this situation is to politely and quickly apologize, use your student’s proper pronoun, and move on. Try, “I’m sorry: I meant to say ‘she,” or even quicker, “Apologies: she.” A big apology or spending more than a brief moment clarifying the proper pronoun of your student can make everyone feel uncomfortable and awkward (Ruberg).

For additional guidance as well as scenarios, visit "Mistakes: What if someone makes a mistake and mispronouns someone else?" from MyProunouns.org

COD and the LBGTQIA+ Community - https://www.cod.edu/student_life/resources/lgbtq/community.aspx

Creating Authentic Spaces: A Gender Identity and Gender Expression Tookkit to Support the Implementation of Institutional and Social Change. The 519 Space for Change. (PDF)

This guide is adapted from "Gender Pronouns and Teaching" from the Centre for Teaching Excellence, University of Waterloo, and has been made available under a CC BY-NC license. 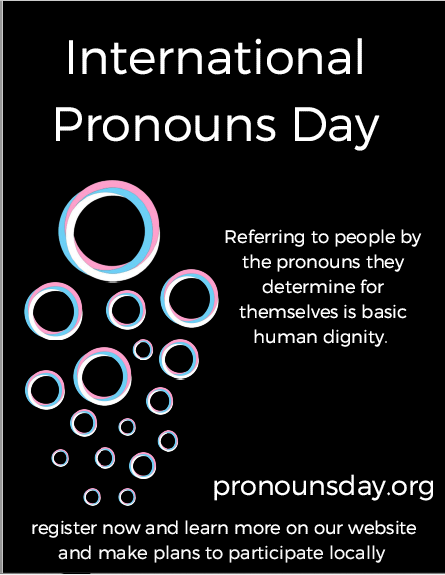 We endorse International Pronouns Day, which seeks to make respecting, sharing, and educating about personal pronouns commonplace. Referring to people by the pronouns they determine for themselves is basic to human dignity. Being referred to by the wrong pronouns particularly affects transgender and gender nonconforming people. Together, we can transform society to celebrate people’s multiple, intersecting identities. We encourage colleges, schools, workplaces, and local organizations to hold educational and empowering events on International Pronouns Day.
Staff login